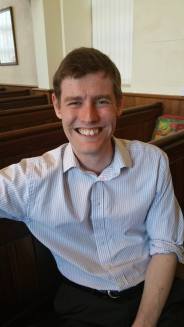 This morning’s worship was led by Matthew Maxwell-Carr who read from Romans chapter 4 verse 34 onwards and also from Romans chapter 9. He preached on the Doctrines of Grace, which he will continue preaching on at this afternoon’s 4 o’clock meeting in the vestry – so come along if you are able to do so! Matthew began by telling us that Calvin’s Doctrines of Grace have such a radical impact on the way we understand Salvation, God and ourselves. The five doctrines of grace can be remembered by the acronym TULIP:

Calvinism is a whole system of the theological thought. Calvin’s allegiance to God was second to none. God is God and we are not. This is one the key lessons learnt by Job.

Total Inability:
No human being is capable of repenting. Genesis 6 verse 5 shows us that God looked upon the human race in the days of Noah and saw every thought was evil. All of us are shot through with sin and wickedness. This is true of children too. From childhood people are corrupt – this doesn’t mean they are as bad as can be. Psalm 14 verses 1-3 shows that “there is none who does good.” None seek God. Jesus is decisive how He views the human heart. We are a sorry lot; with hearts as wicked as this, we cannot seek after God. Jesus says in John 6 verse 44 “No one can come to Me unless the Father who sent me draws him.” The Bible teaches all we want to do is be sinful, we never want to believe or repent. We choose what we want to do – we don’t want to seek God. If it was left to the freewill of man, no-one would choose God – we are totally incapable of choosing Christ. If we are dead in sin we cannot initiate a relationship with God, God initiates the process. I Corinthians chapter 2 verse 14 shows that natural man does not receive the things of the Spirit of God. We are thoroughly lost in sin, we have no capacity to choose Christ. That is why we have told others about Christ but so many do not believe and are indifferent. So if the whole human race is running from God, how can anyone be saved?

Unconditional Election:
Christians believe in predestination. Most Christians believe in Arminianism, that God looked down the corridors of time and saw those who would choose Christ and then He chose them. However, how can this be true? If no-one can seek God, God would not see anyone choosing to believe in His Son. There is no freewill choice. God foresaw everyone running from Him, yet in His mercy He selected individuals to make up the company of the chosen. He chose some and not others. He chose in sovereign love and mercy. Ephesians chapter 1 verse 4 shows us that God chose us in Christ before the foundation of the world, He chose us to be holy. Acts 13 verse 48 – a real corker! The Jews rejected the gospel so it is given to the Gentiles; God chose the Gentiles before the foundation of the world. In John chapter 10 verses 24-26 Jesus has been talking about His sheep, His elect people given to Him by the Father. The Jews had seen many miracles but many did not believe. The elect believe. Those who don’t believe are not Jesus’ sheep. Romans 8 verse 30 show that those Jesus “predestined, these He also called; whom He called, these He also justified, and whom He justified, these He also glorified.” This is an unbreakable chain. Romans 9 verses 22-23. In the human race, some have been prepared beforehand for destruction. We all should have been in that group but some were shown mercy. God is God and we are not.

Limited Atonement:
The work of Christ on the Cross was intended to save only the chosen people, not to save every human being. Jesus knew He was intending to save the chosen, to reconciling the elect to God – it is not for everyone. Romans 8 shows us that not everyone is justified, but for those who are, God delivered His Son for us. Jesus makes intercession for us. The elect will be glorified.