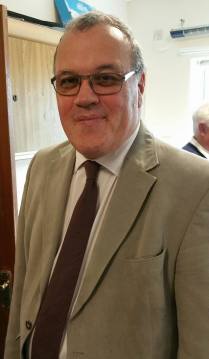 ‘Then the LORD said to Moses, “Stretch out your hand toward heaven, that there may be darkness over the land of Egypt, a darkness to be felt.”’ (Exodus 10:21).

Like plague three and six, this plague comes without warning as Moses does not speak to Pharaoh in advance of the event. This plague strikes at the very heart of the Egyptian belief system. Their chief deity, the creator-god, was Amon-Ra, the sun god of whom Pharaoh was an incarnation. In the famous Egyptian writings The Book of the Dead it is said of Amon-Ra “I am he among the gods who cannot be repulsed.” But here he is repulsed and his life-giving rays, as the Egyptians believed, are extinguished replaced by darkness which spoke of death, judgement and hopelessness. Yahweh extinguishes all trace of Amon-Ra and pharaoh, the so-called incarnation of this deity, is defeated.

As Moses stretches out his hand to the heaven a terrifying darkness engulfs Egypt. The intensity of the darkness is shown by three things:

They could not see an inch in front of their noses and it was as if they had all been struck blind. This terrifying state of affairs lasted for three days signifying it was no momentary experience or passing inconvenience. This all-embracing darkness would have filled them with a sense of doom as it spoke of judgement, curse and death.

Yet, where the Israelites lived there was light (v23). When it turned night in Goshen the Hebrews were able to light torches and candles in their homes. In the Old Testament light signifies God’s covenant blessing such as prosperity, peace and justice. Whilst the Egyptians were engulfed in fearful darkness, the Israelites rejoiced in the light.

The terrible spiritual darkness which sin brings to men is matched by the darkness of God’s judgement against sin. ‘The fifth angel poured out his bowl on the throne of the beast, and its kingdom was plunged into darkness.’ (Revelation 16.10). In their sin men are blind to the truth and condemned to an eternity of darkness.

The darkness when Christ hung upon the cross symbolises His taking the penalty of our sin upon Himself as He is judged in our place. Consequently, we now rejoice in the light of the gospel in the grace of God in the Lord Jesus Christ.

Such is the terror of this plague Pharaoh recalls Moses and says all the Israelites can go to worship the Lord in the wilderness. However, he is still not willing to fully submit to the Lord’s demands. He says the Israelites must leave behind all their livestock. Knowing they could not survive for long without their animals it would compel them to return.

Perhaps Pharaoh thought they could capture and sacrifice wild animals, but the principle that sacrifice had to cost the one offering it had been established in Eden and remained central to the worship of God throughout Israel’s history. ‘Then Ornan said to David, “Take it, and let my lord the king do what seems good to him. See, I give the oxen for burnt offerings and the threshing sledges for the wood and the wheat for a grain offering; I give it all.” But King David said to Ornan, “No, but I will buy them for the full price. I will not take for the LORD what is yours, nor offer burnt offerings that cost me nothing.” So David paid Ornan 600 shekels of gold by weight for the site.” (I Chronicles 21: 23-25).

Moses replies they need their animas to undertake sacrifices God requires but they don’t yet know how many will be needed. Perhaps God will require them to sacrifice all their animals and so Moses insists they will not leave a living thing behind, not even a single hoof!

The amazing thing about God’s grace is that at Calvary the sacrifice was made by the Lord who paid such a high price that we might be forgiven. It cost Him everything and us nothing.

However, in response to the extravagance of God’s grace we are to surrender all to Christ, withholding nothing but presenting ourselves as living sacrifices in His service. ‘I appeal to you therefore, brothers, by the mercies of God, to present your bodies as a living sacrifice, holy and acceptable to God, which is your spiritual worship. Do not be conformed to this world, but be transformed by the renewal of your mind, that by testing you may discern what is the will of God, what is good and acceptable and perfect. (Romans 12:1-2).

Once again we are told God hardened Pharaoh’s heart. Even this great calamity does not bring the king to his knees in repentance. Even the demonstration of God’s sovereign power vanquishing Amon-Ra does not cause him to capitulate.

There is no mention this time of Pharaoh asking Moses to intercede before the Lord on his behalf. Instead, there are vindictive words and angry threats. Pharaoh throws Moses out with a warning ringing in his ears that the next time Pharaoh sees him hen will have him killed.

Pharaoh’s reply (v29) is full of confidence. Yet, Pharaoh is right; a time is soon coming when Moses will not see him ever again. There will be one more encounter with Pharaoh after which the Israelites will leave Egypt for good. Pharaoh has had his last chance and before long the final judgement of God will devastate his household and the land.

It is amazing how those who face the direct and indirect consequences of their sin can blame God for their sufferings. Deep seated hostility to the Lord is found in many a heart despite the Lord’s goodness in His common grace and in affording people the opportunity to repent.

We are reminded that when Jesus was verbally abused He did not reply in kind and when falsely accused He offered no defence as He willingly accepted the punishment due for the guilt of our sin.