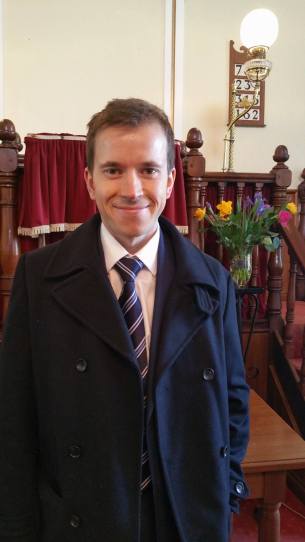 This morning’s worship was led by Aaron Davies – Whitfield who preached from Philippians chapter 2 verses 5-11, which he titled “The lowly steps to humility.”  He described this as an ‘awesome text which should challenge everyone of us.’  There should be a stripping down of pride, a lowering of self and a lifting up of Jesus. When Jesus is lifted up in our lives, our thoughts and our attitudes we will also be lifted up in Him. This is the promise of His Word. This is the way the Spirit of God would have it. We will draw near to God and be comforted. There has to be a lowering of self. We are not perfect people. The true work of God needs to grow in our lives. We need to be stripped, to be crushed, to bring out the fragrance of Christ. So often the Lord challenges us but we will be lifted up.

What Christ was (v5)
Christ’s  equality is with the Father in all things.  Jesus is the one who created everything. We see everything is held together by Him. He is none other than God the Son. This is the one angels, seraphim and cherubim would bow down and worship. He spoke and there was light, the stars were displayed. The Word was made flesh and dwelt among us. He is the Son of God and God the Son. In the Old Testament He is called the Lord of Hosts. He is the Lord of angels who proclaimed His birth. He has never ever not existed, not known everything. He is omnipotent.

What He became- His emptying (v7)

Christ made Himself of no reputation. He stepped down from heaven in humility. He wanted no praise, no glory. He concealed His deity and divinity behind human flesh. He was born in a manger. He chose to be conceived in a young lady called Mary. He never walked on red carpet. He never sought praise and adulation of any man, yet He deserved the praise and adulation of every man.

He took the form of a servant. The Alpha and Omega, King of Kings became a servant to sinners, to fallen humanity. He washed His disciples’ feet. He humbled Himself to the purpose and will of His Father. He made Himself a servant, but He goes lower still

Christ became obedient unto death (v8). There was only one time Jesus lifted Himself up – when He lifted Himself up on a cross. He was lifted up for all men, but never in pride. He was lifted in humiliation He became obedient. Gethsemane, when He saw what was before Him, when He knew He would suffer the wrath of God, He fell on His face. Trembling and sweating great drops of blood He asked for the cup of agony, of suffering to be taken away. Yet He became obedient unto death. He laid down His life like the Lamb of old on the altar. He did not turn or resist, He humbled Himself. Sinless. Spotless. Perfect. Before He could receive a crown of honour He had to receive a crown of thorns. What does this mean to us? We must never ever think anything is beneath us, no-one ever goes lower than Jesus. The church is not a place of self-promotion but of Christ’s promotion. We need to serve Jesus, lower ourselves, strip away our pride, become like Jesus. Humility in an attitude and action so we can lift Jesus high. We need to lower ourselves then we will be lifted up by the Spirit of God.

Where Christ is now (v9)

Jesus, who became so low, was gladly lifted high by the Father. He is more glorious now than He was before. His exaltation is unique. He is exalted as a man in human flesh. There is a man in glory. He has raised our human nature. He is now fully God and fully man. He did this so our fallen nature will be likened to His glorious body. We will one day be clothed in immortality of life. He is now exalted. Christ did not do this Himself, the Father exalted Him (Psalm 24). He has been given name above all names (v10). One day every knee will bow and confess Him as Lord. Some will do this to their condemnation but some who will bow the knee to glorification. Have you bowed the knee and do you hold Him as your Saviour? Bow the knee and confess Him. Let Him be Lord of your life, your dreams and your aspirations. One day everyone will confess that “Jesus Christ is Lord, to the Glory of God the Father.” (v11).

#TuesdayTruth 📖 Revelation 4:11
#TuesdayTruth 📖 Luke 8:39
We are delighted to be welcoming Jeremy Bailey to preach with us tomorrow at 10:30 a.m. A warm welcome awaits for all who wish to join us 😊🌟To book your place click the link in our bio 😊
#TuesdayTruth 📖 Hebrews 10:23
We were delighted to meet our young people face to face today as we met outdoors in the chapel garden 😎🌿. We were excited to begin our @scriptureunionew and @thisisrooted_ junior Journals, exploring our names and their meaning, understanding that God knows our names because He created us and each one of us is unique and special to Him ❤️. We had a time of prayer 🙏 before playing games 🏃🏃‍♀️ and planting peas and carrots 🥕. Already looking forward to next week!😀