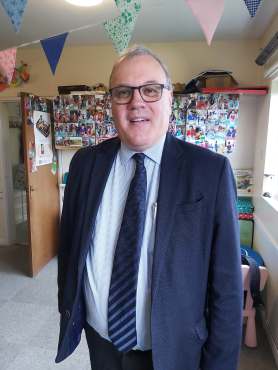 There has never been a more important announcement than God sending His servant into the world to bring the benefits of His Kingdom to men. We would expect the news to be serious but to have joyful tones and to be dramatic. That is the case in these verses here. God underline the enormity of this announcement as He first addresses the servant Himself and then the people of Israel.

‘Thus says God, the Lord,
who created the heavens and stretched them out,
who spread out the earth and what comes from it,
who gives breath to the people on it
and spirit to those who walk in it:’

It emphasises the word for God, underlining He is the uncomparable one, the only true God, the one who effortlessly laid out the universe, who unfolded the whole of the universe with consummate ease and ultimate power. He is the author of all human life, the one who is to be listened to and obeyed. He is the one who we must pay the utmost attention to as He speaks. The ‘Lord speaks of His covenant faithfulness. He came for all He has created. He did not abandon the universe and men to sin. He cares and maintains all creation.

He sustains men by giving them breath. Here is the God who has created this universe and set men in it. He is committed to the welfare of it, He does not stand idly by. In love and mercy He sends His servant to be the Saviour. He does not stand aloof from His creation. He is intimately concerned for men. The Lord Jesus Christ reflects this in His life. We see God’s commanding control over nature and disease, His care for sinners.

This announcement should be accompanied by a great fanfare because it is good news. The coming of His servant, the lord Jesus Christ, proves it. The love of God is so great for the world He made, which rejected His rule, He desires the well-being of His creatures. He must condemn fallen mankind because of their sin. But He shows ‘common grace’, His goodness, to all men. His particular love towards His people is all embracing. We should be comforted to know that our Creator cares for us, even when we all others desert us.

‘I am the Lord; I have called you in righteousness;
I will take you by the hand and keep you;
I will give you as a covenant for the people,
a light for the nations,
to open the eyes that are blind,
to bring out the prisoners from the dungeon,
from the prison those who sit in darkness.’

He promises to accompany His servant, to take Him by the hand, to make His success certain. Consequently, the servant will be the embodiment of God’s covenant. Every commitment He has made to men will be fulfilled through His servant. Man, in his rebellion, has plunged himself into bondage and sin. God sends His servant to bring light into darkness, and freedom from their bondage. He will restore His people to true freedom. The Lord Jesus Christ is God’s light to a world wrapped in the darkness of unbelief (John 8:12). God sends Him to release men from their bondage to sin. He brings light and freedom where there is darkness and bondage.

By nature we all live in the darkness of sin (John 3:19). We have lived lives in sinful indulgence, in bondage to our sinful desires, full of darkness of godlessness. This is the terrible predicament of all who reject God. But God in His mercy has sent the Lord Jesus Christ to solve the problem. In His perfect life we see what man is supposed to be. But He is more than our example; by offering Himself as a sacrifice for our sin, He offers a relationship for us with God, which brings light into our world. He offered Himself willingly up to that cross that we might now the freedom of knowing Him. The freedom of what we are supposed to be – children of God.

‘I am the Lord; that is my name;
my glory I give to no other,
nor my praise to carved idols.
Behold, the former things have come to pass,
and new things I now declare;
before they spring forth
I tell you of them.’

He declares that His concern is rightly for the honour of His name. Here is the God of glory, the God who is able to do all. He is a jealous of His own name. He will not share His glory with any other (idols). God tells them of a new era in which His glory will be demonstrated more fully than before. All that He has done so far will fade into comparison to the new things He will accomplish with His servant. It will eventually blossom into the new heavens and new earth (Isaiah 65:17, Revelation 21).

God is speaking here of how His past glory had been magnificently demonstrated but it is nothing of the glory to be demonstrated in the future – in the work, life, death, resurrection and return of His servant, which will lead to the new heavens and new earth. With the coming of His servant, God’s glory would shine for all to see. The glory given to God through all His other servants, through all His works, are totally eclipsed by the glory gained through His servant, the Lord Jesus Christ. In Him, God’s glory is displayed to the nations. He declares, ‘Sit back and see what I’m going to do through my servant and marvel!’ (Colossians 1:19, John 1:14).

#TuesdayTruth 📖 Revelation 4:11
#TuesdayTruth 📖 Luke 8:39
We are delighted to be welcoming Jeremy Bailey to preach with us tomorrow at 10:30 a.m. A warm welcome awaits for all who wish to join us 😊🌟To book your place click the link in our bio 😊
#TuesdayTruth 📖 Hebrews 10:23
We were delighted to meet our young people face to face today as we met outdoors in the chapel garden 😎🌿. We were excited to begin our @scriptureunionew and @thisisrooted_ junior Journals, exploring our names and their meaning, understanding that God knows our names because He created us and each one of us is unique and special to Him ❤️. We had a time of prayer 🙏 before playing games 🏃🏃‍♀️ and planting peas and carrots 🥕. Already looking forward to next week!😀