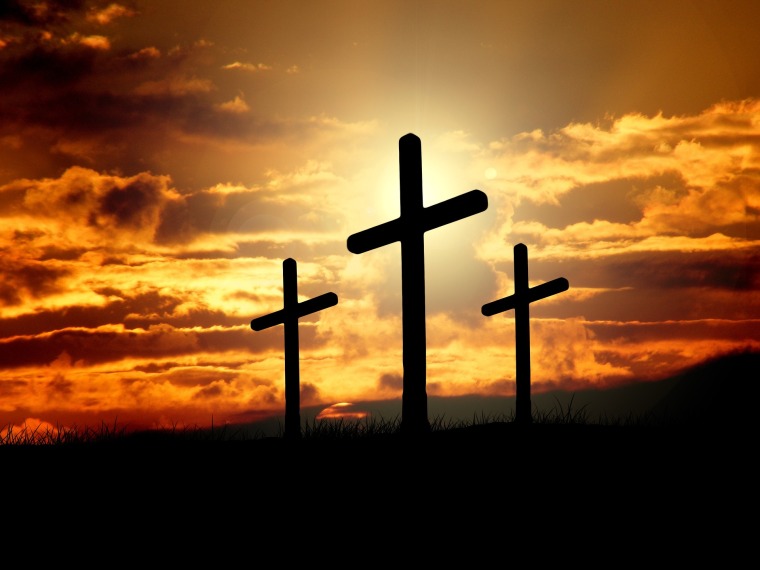 Our Good Friday morning service was led by Rev. Dr Gareth Edwards who preached from Mark 15:21-28.

The journey of Christ to the Cross was a unique journey, a solitary journey that only the Saviour could make as He carried the burden of our sin to Calvary. The Holy, innocent Lamb of God took away our sins.

Each condemned man carried the cross beam to his crucifixion, but evidently the Saviour was too weak so the soldiers compelled another to carry the cross for Him. Simon was clearly converted (Roman 16 v13) and this was a great turning point in his life. The Saviour was already at breaking point before He reached Golgotha, close to death (Mark 14 v34). In Gethsemane he was already laid down. He could not bear the weight of the cross because He was carrying the unimaginable burden of our sin on His shoulders. Such is the weight of our sin He struggles under His burden. It is the work of the Holy Spirit to make us aware of our sin, then the Holy Spirt points us to Calvary and we see it is the Saviour who has carried that burden to the cross. We have been set free from sin’s burden and its consequences.

The King identified with sinners; the piece of wood carried around His neck bore the crime. Jesus was accused of proclaiming Himself as being a King and rival to Caesar- a false accusation. He is a King, the King of Kings, and the eternal, omnipotent Lord of all. Yet, He was crucified amongst two thieves. The King of Kings died among common criminals, taking my place and yours. He completely identified with us. He was made to be sin although He knew no sin. In the eyes of the Father He was us, He bore our punishment, died our death. What unbelievable love is this? Such was His love He was prepared to be a Servant King; He submitted Himself to the undignified action of washing His disciples’ feet. He set aside His glory because He loves us so. We should be devoted to Him, the King of Kings, our Creator. Why is He devoted to us? Because He is determined to love us. On the cross He has travelled from the height of Glory to the depths of hell to bring you and I Salvation. We are to bow to Him, our Lord and Saviour. He identified so fully with us. But there is more . . .

We see how Christ consciously suffers. When they finally reach Golgotha, the soldiers offered Jesus wine mixed with myrrh, which would have acted like a mild anaesthetic, but Jesus refused to take it – the one concession. He rejected any relief from pain so he continued to feel the agony as the cross was raised into position. He must suffer the full wrath of God. Our sin draws from God the full wrath, He cannot show even the slightest mercy. The only way we can have mercy is for God to show no mercy to Christ. How great was the suffering Christ bore for us – the pain, the torment, the torture. But much worse – the wrath of God breaking Christ’s body, causing Him the most excruciating agony of soul.  He takes every blow of God’s wrath, all to make sure we would not have to suffer, to make sure all our sins were paid for in full because He loves us so.

Not everybody was concerned about what was taking place as Jesus hung on the cross. The soldiers were just concerned about the one perk they had, casting lots to see who had the clothes of the crucified. Whist the Saviour of the world was making atonement for sin, they were only concerned with who would win the prize for the victim’s cloak. They did not see the King of Kings suffering for their sins. Today there are many people doing the same, so many who are unconcerned about Calvary. They are more concerned about making and spending money. They are oblivious to salvation. His death alone bough atonement for their sins. We look upon His death and see Him hanging there in our place and we say “Hallelujah, what a Saviour!” From condemnation He has set me free. We come to reign, we come amazed at His love, and we come to praise and worship Him. We ask that he would enable us to give our all for Him as He gave His all for us.