In the past few weeks we have seen again the suffering of the people of Syria. We’re moved to sadness seeing the plight of men, women and children as evil men inflict untold misery. It moves Donald Trump into action, it moves the world to condemn. Yet when it comes to watching the suffering of our Saviour, the world, even perhaps you and I, remain unmoved. Why? Because we are responsible for this suffering. To be moved would be to acknowledge our guilt. It is right that the world is moved to tears by the people of Syria, but, oh how we should be moved by the tears of Christ.

The verses in Mark 15:15-20 fulfil the prophecy of Isaiah 53. We must consider the awful reality of the Saviour’s sufferings and repent.

Isaiah tells us, ‘by His stripes we are healed.’ (Isaiah 53:5). The Saviour had already suffered; His face had been beaten beyond recognition ‘And some began to spit on Him and to cover His face and to strike Him, saying to Him, “Prophesy!” And the guards received Him with blows.’ (Mark 14:65). Now He is scourged. This was common practice so the person being crucified was weakened before the crucifixion. Many died at this stage. Jesus would have been stripped and forced to bend over and flogged with a whip of thongs, to which were attached metal and bone. In Jewish law a man could only receive 40 lashes, but in Roman law there was no limitation. Jesus would have been whipped until the flesh was removed from His back. Unimaginable pain and suffering.

What was the purpose? The Romans weren’t concerned with God’s purpose. Jesus was so brutally beaten and whipped as punishment for your sin and mine. ‘Then I will punish their transgression with the rod and their iniquity with stripes.’ (Psalm 89:32). By His suffering our sin is forgiven. As horrendous as this description of the Lord’s suffering is, it doesn’t tell us of the depth and anguish of His soul as He bears the wrath of God against your sin and mine. Each stroke was blow from God for a punishment for my sin. The healing was only made possible because of the great sufferings of Christ, ‘by His stripes we are healed.’

This picture of Christ’s mutilated body should cause us great sorrow. We take sin so lightly, we excuse it. We see its true significance here. Sin is an affront to God’s nature, the most sickening sight. It must be punished. Every fibre cries out justice for your sin and mine. It demands the sufferings of hell. The Lord Jesus Christ suffered hell for your sin and mine. We must despise sin and repent of it. Trust in Christ and receive the forgiveness His sufferings alone can bring.

Isaiah also says Christ was, like a lamb that is led to the slaughter.’ (Isaiah 53:7). The Lord had been bound and led around all night, dragged from one place to another. Here again, in Mark 15, we see Him being dragged around by the soldiers, first led to the barracks, ‘And the soldiers led Him away inside the palace (that is the governor’s headquarters), and they called together the whole battalion.’ (Mark 15:16). They spitefully abused, mocked and spat at as they degraded Him. Then they dragged Him out to be crucified, ‘And when they had mocked Him, they stripped Him of the purple cloak and put His own clothes on Him. And they led Him out to crucify Him.’ (Mark 15:20). This glorious Lord subjected Himself to be led about like a common criminal. He willingly submits. Why? Because He willingly agreed to do His Father’s will, to submit to God’s punishment for your sin and mine, ‘like a lamb that is led to the slaughter.’

Jesus did not resist or reject because, in love, He was going to die for me and you. What great love Christ has for us that He could endure such treatment. It’s impossible for us to see our Saviour’s willingness to die for us not to render ourselves completely to Him. He loved me so shouldn’t I love Him with all my heart, all my being, all my life? Should I not worship Him, praise Him, serve Him and love Him?

The Saviour’s experience reflects the reality of sin in hell. There is no freedom in hell, no possible escape. The opportunity for freedom lies this side of the grave. It is Good Friday because it’s the day in which the hope of Salvation came to those in bondage and set them free to serve Him. The Lord was bound so that we might go free.

‘He was despised and rejected by men.’ (Isaiah 53:3). We have already seen in Mark 14:65 that Jesus had already been mocked by the soldiers of Herod, He was now treated with contempt by the Roman soldiers. This was prophesied in Mark 10: 33-34, ‘See, we are going to Jerusalem, and the Son of Man will be delivered over to the chief priests and the scribes, and they will condemn Him to death and deliver Him over to the Gentiles. And they will mock Him and spit on Him, and flog Him and kill Him. And after three days He will rise.’ The Romans despised the Jews, so when the Roman soldiers had the opportunity they took great delight in ridiculing them. Now, even though Jesus was innocent, they call out the whole cohort, about 600 men, to mock Jesus. They dress Him as an emperor and mock Him as if He is a king. Mixed in with this sport was further cruelty as they force a crown of thorns on His head. They spit their revulsion in His face, then they put His own clothes back on Him and take Him to be crucified. ‘He was despised and rejected by men.’

The young Campbell Morgan, after passing his doctrinal exams to become a minister, then had to preach a trial sermon. After being told he was not successful, he wrote to his father one word, ‘Rejected.’ His father’s immediate response: ‘Rejected on earth. Accepted in heaven.’ Campbell Morgan went on to become a great evangelist. We are only accepted in heaven because Christ was rejected on earth. Those who mocked Jesus as the King of the Jews will have to face Him as the King of Glory. One day they will bow the knee and be filled with awe and fear at His appearance. And so it will be for all those who mock Christ today. What degradation that Jesus endured – not only physically assaulted but psychologically abused as well. He emptied Himself of all majestic glory in paying the price for our sin. Again we see that the penalty of sin is extreme – because sin is extreme. It’s the extreme rejection of the goodness of God. It justly deserves the wrath of God. The terrifying thing is those who despise and reject Christ today will be despised and rejected by God for all eternity. What a terrible fate! If men would just humble themselves before the Lord they will know the love and acceptance of God for eternity.

Gaze upon Him and marvel that for us, He died. ‘Truly, truly I say to you, whoever hears my word and believes Him who sent me has eternal life. He does not come into judgement, but has passed from death to life.’ (John 5:24). 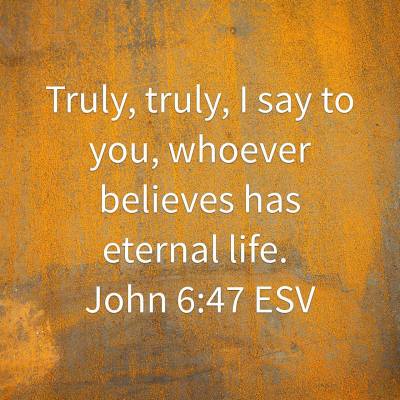