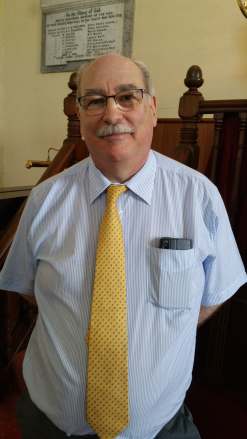 The prophet Jeremiah is often overlooked, which is a terrible mistake. Remember, when Jesus asked, ‘Who do people say I am?’ some thought He was Jeremiah. Perhaps because the message of Jeremiah is so intertwined with the message of Jesus, a message full of compassion. Maybe that is why Jesus is compared to Jeremiah because of his compassion. When we are to present the truth we can’t escape sin. David, in Psalm 8, asks the question ‘What is man?’ We have to recognise our condition, our state. Even as Christians we wrestle with sin.

Jeremiah prophesied in some of the most turbulent times in Israel. The Assyrians, Babylonians and Egyptians were all vying for attention. Jeremiah’s mission is told in chapter 1:9. In essence, he is to build. He can’t build unless he takes the rubble of our lives and restructures. The opening chapters of Jeremiah are about repentance. We mustn’t skate over warnings – we’re here because Jesus died on the cross. He came to give us beauty for ashes. If you sin you face judgement. But Jesus is alive.

There are many images in this chapter. Every bottle is filled with wine. It was a place of plenty. Yet we must not focus on wrong things. The Lord instructs Jeremiah to get a sash, like a kilt that fitted around the waist and went down to the knee. It was a very useful garment and covered the main areas. It is described as linen. Linen is especially used for covering tables and precious garments (Revelation 18:16). It is used for angels’ clothes. Our Lord and Saviour was wrapped in fine linen. In Revelation 19:18 we read the Church is arrayed in fine linen, it is splendorous.

‘For as the loincloth clings to the waist of a man, so I made the whole house of Israel and the whole house of Judah cling to me, declares the Lord, that they might be for me a people, a name, a praise, and a glory, but they would not listen’ (Jeremiah 13:11)

Jeremiah was not really a priest but a prophet. Prophets weren’t finely dressed, so it would have been a shock to people to see Jeremiah dressed in linen. The sash was not to be put in water, showing it was a brand new, fresh garment. The reference to clinging reminds us of Genesis 2:24 and the relationship between Adam and his wife. It is an indication that the people of God are to be intimately connected with their God. God is invisible, so how can He be made known? He dressed Himself with His chosen people.

Why was the sash discarded? Jeremiah wore the garment but he was then told to hide it. He travelled 700 miles north to the Euphrates. This is significant; it was where Judah was to be taken into captivity. Jeremiah was then told to recover it. Unsurprisingly, it was ruined. Why did the Lord do this? What were the chief sins of this time? ‘This evil people, who refuse to hear my words, who stubbornly follow their own heart and have gone after other gods to serve them and worship them, shall be like this loincloth, which is good for nothing’ (Jeremiah 13:10). The people were guilty of two main things: they refused to hear God and followed their own ideas. Do we sometimes refuse to hear Jesus’ words?

The people were puzzled by Jeremiah. They thought they were still doing things God wanted them to do (Jeremiah 7). They loved the temple. We can say we love fellowship, the scriptures, but do we love the words of Jesus? We are influenced by science, by our culture. Are we being transformed? (Romans 12:12). What are we doing to remove ourselves from worldly thinking? It is very easy to be influenced by thinking of the old flesh. We are told to cast off the works of darkness and put on the armour of might, to deny ungodly and worldly lusts. The call for us is to get the Word into our minds and hearts so it is life. Putting God first can be a struggle. Get on your knees and eat the words (John 6).  Do we hear God so much that we want to change things?

The people followed the dictates of their own hearts.  God wants you to hear what He wants to say, to walk with Him. How do you stop following the dictates of your own heart? Read and devour the scripture (Hebrews 4:12). Judah was to face exile. The ones who were the clothing of God were now going into exile. They had the law, the tabernacle, priests. They were supposed to be the light of the world. But now they were ruined. They had not heeded Solomon’s wise words. Man, born of Adam, could never do what God intended us to do (Deuteronomy 26:16-19, Jeremiah 13:11). Judah had blown it. Is there no hope? Praise God, the second Adam came down and took the form of a human person, Christ is the true image of God.

Lesson to be learned:

Adam couldn’t do anything about his sin. There is hope because Christ came in my place. We have the hope of Christ. Those who put their trust in Him, He gave the right to become the Children of God. We now adorn God. We are to listen, hear and give ear. Look at the compassion of the Lord. It is so important we spend time humbling ourselves before the Lord, listening. Do not be proud. Pride stops you from listening. Humble yourself. The Lord Jesus Christ came as a humble servant.

When things go wrong, a lot is down to our sinful actions. To be clothed with Christ is to look to Him. In our lifestyle we are to seek to call upon the Lord to be more like Him (Romans 6:4). We are called to walk in the Spirit, not in the flesh, a walk worthy of the Lord. Let’s listen to Him and walk in His ways.