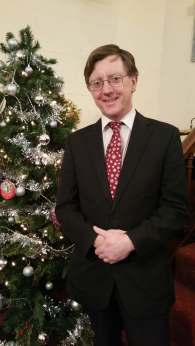 When reflecting on the Christmas story, Joseph is usually in the background, in a supporting role. However, if we look at the scriptures, Mary and Joseph have equal billing in the Nativity story. Here in Matthew the focus is on Joseph. Luke’s focus is on Mary. The Roman Catholic tradition of focusing on Mary has contributed to the general forgetfulness of Joseph. Here in Matthew’s account of the Nativity, God’s story is from Joseph’s perspective. Joseph was a carpenter living a fairly normal life. Other than the Nativity and visit to Jerusalem when Jesus was 12, there is no other mention of him. He had a humble station in life and yet the Holy God dealt with him directly.

As a carpenter Joseph would have had a busy life of hard, manual labour. He was engaged to be married to Mary, everything seemed set for the rest of his life. He was betrothed – effectively married, underlying the seriousness of the relationship. May became pregnant by the Holy Spirit. Joseph, in his human nature, must have thought this incredible. He probably thought the worst, that Mary had been unfaithful. Deuteronomy 22 warns of falsely accusing a woman of adultery. If, however, this was true, an adulteress would have been stoned to death. This was the potential threat hanging over Mary. However, more likely, it would have ended in divorce (Deuteronomy 24:1).

Joseph could have formally divorced Mary. But instead he wanted to put her away secretly, to save her from public embarrassment. Joseph is to be commended here. He did not have a knee-jerk reaction to Mary’s pregnancy. He wanted to protect both Mary and himself. Yet it’s a wrong decision, even if made for the right reasons. ‘But as he considered these things, behold, an angel of the Lord appeared to him in a dream, saying, “Joseph, son of David, do not fear to take Mary as your wife, for that which is conceived in her is from the Holy Spirit.”’ (Matthew 1:20). Joseph still considers what to do when God intervenes to reveal exactly what is going on. As human beings we can be easily confused and distracted by what we see. God in His grace intervened in Joseph’s life.

God then reassures Joseph. An angel says, ‘Do not be afraid.’ This phrase occurs throughout scripture (e.g. shepherds, Mary). Jesus repeatedly had to tell people not to be afraid (e.g. disciples on the boat in Lake Galilee). God always reassures His people. Joseph here is going to be told the reason for Mary’s pregnancy, which is the will of God. The Holy Spirit is the agent of God’s creativity, particularly in the creation of new life. Isaiah 11:1-2, Isaiah 42:1.

As well as being told by the angel of Mary’s pregnancy, Joseph was probably told by Mary herself. Presumably he did love Mary. Any doubts about her truthfulness would be removed. The angel now goes on to offer an explanation about what is happening. God is under no obligation to do this but issues commands in a loving manner (Matthew 1:20). Joseph is to take Mary as his wife, to continue the marriage. Joseph is part of the lineage of David, born into the people of God. Any sons of his would be legally considered to be sons of David, thus fulfilling the prophecy that Jesus would come from David’s line.

‘She will bear a son, and you shall call his name Jesus, for he will save his people from their sins.’ (Matthew 1:21). For God to reveal a child’s name would reveal something special and the role for them. Here, even before Jesus was born, God is saying He will save people from sins. Isaiah prophesies the role of Jesus’ life. When Jesus came to earth He was Immanuel, God with us. We are separated from God by our sin, but Immanuel, God is with us.

God remains in control throughout. Having been reassured and given an explanation, Joseph obeys. He didn’t pause to consider any more. He acts and obeys. It is not just blind servitude. God has explained to Joseph what is going on. His own knowledge of the scriptures would have directed his way as well. Joseph kept Mary a virgin after marriage. There was no doubt Jesus was born of the Holy Spirit. Joseph follows God’s guidance to the letter.

What does all of this mean for us? God intervened in Joseph’s life. Even as believers we can find it difficult to follow God’s will. After intervening God then reassures Joseph. Because God is with us we too know things will work out. God didn’t reveal everything to Joseph, but he knew it would all be OK. God gave Joseph everything he needed, enough so he could make the right decisions.

Sometimes, life can overwhelm us. The temptation is to despair but God guides us step by step. Sometimes we just need to get on with the work. God will never overburden us. Joseph obeyed. Quite simply, that’s all we need to do. God is sovereign. He knows what is best for us. God wants us to enjoy our lives. We only really do that when we trust the future to God. This Christmas, may we, like Joseph, find the time to pause and consider things. Simply trust Him for tomorrow, as Joseph did.