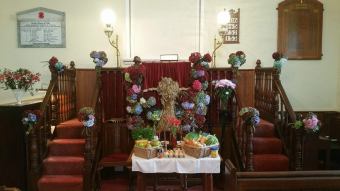 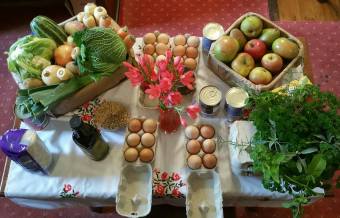 Boaz was a farmer, a straight forward man. This passage refers to him as a kinsman redeemer. What does it mean? A kinsman is a relative. In the culture of the time there was a provision from God for His people; God instructed His people that if a woman lost her husband and had no son to look after her, a relative had this responsibility – making sure the inheritance was carried on. There was always someone there.

Naomi, Ruth’s mother-in-law, had lost her husband and two sons. Ruth, her daughter-in-law, had decided to stay with Naomi and offer the support she could give. Ruth’s husband has also died. Not only was one widow looking for someone to take care of her, but two widows sought help. Naomi thought of Boaz for Ruth. There may have been others, but Boaz was first to come to her mind. In chapter 2 Boaz helps Ruth out. Ruth worked her way around the edge of the harvest field. Boaz told his workers to let her have more.

Naomi has decided that Boaz is the man who needs to take on the responsibility of being a husband for Ruth. She tells Ruth to go to the threshing floor, to be sensible and virtuous. Ruth does as she is told, letting Boaz be her kinsman redeemer. Naomi’s plans are carried through when they marry.

What qualities did Boaz need to be a kinsman redeemer?

What has this to do with us? Why are we here? To praise God for His provision, to worship Him. Anything more? More than anything it’s the desire and prayer of many people that each one here would come to know what it is that is so wonderful about our Saviour Jesus Christ. We need Him. Without Him anyone who stands alone is in a terrible, vulnerable, hopeless situation. Some may be insulted by this. It’s not an insult – it’s the truth. Even if you feel it’s OK to be in church, or you’re a kind, good, friendly person who does wonderful things – it’s not enough. The Bible says all have sinned and fallen short of the glory of God. All. Every single one of us gathered here. Every single person who has ever drawn breath, bar one, has sinned. We have offended God who is just and holy because we are not yet pure and holy. God demands a price. It is not one we can afford. There is nothing we can do that will pay that price. We need someone who can step into the breach – a kinsman redeemer who can take responsibility for us. There is only the Lord Jesus Christ Himself.

He met all the criteria as our kinsman redeemer. It points to a life-changing reality. Boaz was the ideal kinsman redeemer for Ruth. Ruth knew this. She had had to ask Boaz to take responsibility for her. She asked him to redeem her. Do we recognise our need? Without Jesus we can’t be saved. You have to go to Him and ask Him for forgiveness. Think of what He has done for you – given up the glory of heaven and born as a weak, feeble human being, suffering alone. Then He went to the cross and was killed for you. If you go to Him He will never turn you down – He is our perfect kinsman redeemer. Ask Him to save you. He will say yes. Then you will know what it is to be cared for by one who loves you.