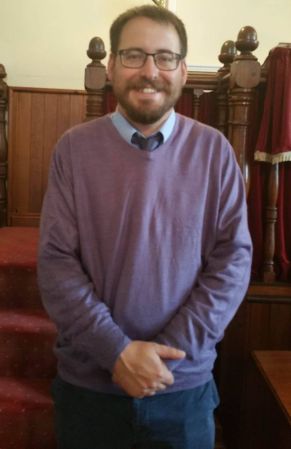 The world is changing, and there is all sorts of political unrest. It is much the same as it was during Ruth’s life. She lived during the period of Judges, when Israel had no king. As a people they were fighting to survive against foreign influences, foreign gods and foreign invasion.

You will see the word “Moab” a lot in the earlier verses of our reading. “Moab”, is essentially a word for “Foreign”. Foreign means. “Bad”, “Bad”, “Bad”, “Bad”! But not in a racist way – the entire book is about how Ruth, a foreigner, is welcomed into God’s family. ‘Foreign’ here means ‘away from God and His promises.’ You can almost replace the word ‘Moab’ with ‘away from God.’

Naomi becomes desperate so she thought best to go back home, back to God which is? …good! As she embarks on her journey we then read ten verses of goodbye. It is like a train station goodbye. Naomi in verse 8 tells her daughters to go, and blesses them in the name of God. The daughters wished to come with Naomi so in verse 11 she reiterates further why they should go from her.

“Stay with your people and find husbands.”

It would appear Naomi has learned her lesson on leaving her own kin to go to the foreign land. A lesson that cost her all the men in her life!

She obviously did not want her Moabite daughters in law to suffer the same.

V13 the Lord’s hand has turned against me – Naomi says before graciously sending them away in tears.

A touching moment……or is it? If we look at the context we see Naomi is in the mire! We know from Deuteronomy, Israel had provisions for their widows.

Naomi, would have also known the shame that was ahead of her as a returning Jew, who left her people at a time of great need (famine) to go to land of a sworn enemy, Moab for profit.

So, I propose, with the context in mind, that this loving “train station” goodbye is not what it seems. I believe Naomi was in fact preparing for her homecoming! She was concerned that returning with two foreign Moabite women would cause her even more shame? “Naomi’s back and she allowed her Jewish sons to marry Moabites!”

Could this be why Naomi was sending her daughters in law, Ruth and Orpah away? Not in love, but to ease her return back to God? This knowledge changes this dialogue into an argument!Naomi’s tone changes from v6 to a desire to feed her family, to (v12) palming them off on other men!

Naomi is not pleading with her daughters-in-law to come to the God who provides for His people. No! She is clearly trying to persuade both Ruth and Orpah of the many material benefits they will have if they stay in Moab (v9) a new home and a husband!

On Ruth’s insistence to stay, Naomi’s reply in verse 15 becomes a rather coarse and short reply. Naomi clearly does not want her daughters in law, the baggage of her past shameful choices to come back with her.

But as we read Ruth remains honourable and faithful and insists (v16) that She wants Naomi’s God to be her God too! V18 ends the discourse…..“Naomi stopped urging her”. What you have here is a car ride home with a loved one just after an argument.

So how does this argument between two women, thousands of years ago help us today? We are all like Naomi. We have all disobeyed God, gone to foreign lands and done terrible things. And going away from God is always…..bad!

When we realise what we have done is wrong, we then have a desire to repent, so say sorry to God and come back to Him. Often with big ideas of how to make things right by ourselves, we often try to hide our shame, our daughters of Moab, from Him.

But God sees all and knows all and on the cross as He hung naked between two criminals, He took the shame for you, that you deserve for you wrong doing and in His resurrection He beat it!  And if you give Jesus your shame, He can turn those things that once damned you into greater blessings. He can turn a foreign daughter of Moab, Ruth, into a grandmother of Christ Himself!

Do not think that you can’t come to God until you have sorted yourself out. Do not think you have to wait to be an adult before accepting Jesus into your life. Do not try to hide your Moabite daughters’ in-law from Him as you prayerfully return!

He will accept you today for how you are – warts and all! Give yourself over to Him completely and He can turn your problems into wonders of grace for His Glory!

This is the Gospel! The good news! That God saves sinners! Of which I am chief!

Ruth in faith came with Naomi – and that faith lead to God’s embrace. As you will see if you read the rest of the book, Ruth is welcomed in and marries Boaz and her identity changes.

Ruth the Moabite – the Moabite! – becomes a direct ancestor of Jesus Christ our Lord as a result of her faith! Imagine what God could have done if Naomi let Orpah came too!

Do not be like Naomi is here and let your past and present sin hinder your relationship with God today. Do not wait until your life is good enough for God, before coming back to Him, because it will never be good enough without Him.

Bring your shame (your daughters of Moab) to the cross and see God Bless you.

Come to Jesus today and ‘instead of your shame you will receive a double portion, and instead of disgrace you will rejoice in your inheritance.’ (Isaiah 61:7)