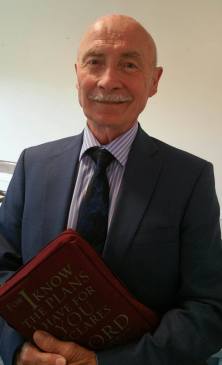 Elisha was a great man of God. Jesus refers to him in the New Testament. Elisha was used by God, he had a mighty portion of God’s Spirit resting on him. He was a teacher of students. They lived in Gilga, an important place in the Bible. This was where Joshua camped, it was where men were circumcised, where Samuel preached. There was a college in Gilga where Elisha taught the students. They sat at his feet and learnt from Elisha. Elisha loved the Lord. God used him greatly. The students were greatly blessed and grew in number. As they increased, they asked Elisha if they could move and build a bigger place.

They suggested to Elisha that they moved to the Jordan and live there. They would have water (there was a drought in Gilga), and they could expand the work and live for God, then go out themselves as prophets. The young men wanted the counsel of Elisha and asked him if they could go. He said yes, but they wanted him to go with them, ‘Then one said, “Please consent to go with your servants.”’ (II Kings 6:3). They were keen for Elisha to go with them so they could learn more from him. So Elisha moved with them from Gilga, walking 35 miles to the Jordan across rough terrain to serve the Lord.

The students cut down trees to make booths. They used axes. They were poor. One of the students did not have an axe but he wanted to join in, so he borrowed an axe. However, as he hammered away at a tree the iron axe-head flew off into the water and sank. Panic set in. The River Jordan is a fast flowing river, there was no chance of rescuing the axe-head. Yet the young man was conscious that he was responsible and needed to make good, he knew he had to pay back what he had lost. He was distressed he had lost something belonging to someone else. He was poor. God chooses poor people. We should be ready to serve Him.

The young man was part of a team – he didn’t want to let the team down. We need to be careful of the way we act. The man cried out to his Elisha, “Alas, master! For it was borrowed.” (II Kings 6:5). He went to Elisha, to the right place, to the man of God. We believe God is sovereign. We may pray in the morning, ‘I’m in your hands Lord, whatever happens today is in your control.’ God is involved in all situations, even when things don’t go our way. God sends these things that can affect our reaction. We have a conscience to admit when we’re wrong. The Lord allows these things to test us. What is important is how we react. The student went to his master, Elisha. We go to a greater Master, Christ. People view our reactions, they should see Christ in us.

Elisha was concerned for the young man. He asked, “Where did it fall?” And he showed him the place. So he cut off a stick, and threw it in there; and he made the iron float.’ (II Kings 6:6). Elisha did not tell the young man off. When things in our life go wrong, Jesus asks us to tell Him about it. He knows our situation, He knows our thoughts.

Elisha lived close to God and knew the Lord. The student showed him where the axe-head fell. Elisha then threw a stick into the water and the iron axe-head floated to the surface of the water. A miracle was worked by God through Elisha. God made gravity, God can overcome gravity – as He did when Jesus ascended into heaven. God can make the impossible possible. The situation was hopeless to humans but not to God.

We pray for the axe-heads, sinners sunk in sin. Every one of us is born in sin. We pray for people, maybe for many years, who have sunken iron hearts, sunken in sin. What is your axe-head this morning? God is the God of the impossible, the God of grace, the God of Salvation. God will bring an end to the Devil, an end to sin. Christ can save you, He saved me, He can save anyone. Elisha is no longer on the earth, he’s in heaven, but his God is still here on earth.

Whatever give us anxieties, take it to God. God is a God of the impossible. He will deliver. Be sure to glorify Him and praise Him. Praise Him more.

It's been great to catch-up with news and have a time of prayer 🙏 at our Ladies Zoom afternoon , 😎 lightening the lockdown mood, thanking God for His provision and bringing the needs of our fellowship before the throne of grace 😘
We've had an exciting Z👀m Kids meeting this afternoon, sharing salt dough faces we have all been painting with bright bold colours, noting how diverse they all are 🎨. We explored how we are all unique and wonderfully made by God (Psalm 39:14) 👲👧. After playing a game we had a time of prayer 🙏 and shared our news. Looking forward to starting a new project on Sunday 😊 #Psalm139v14 #PenuelRoch #RochVillage
#TuesdayTruth 📖 2 Timothy 1v7 #PenuelRoch
🎼🎵 Today's #MusicMonday is a 'declaration of hope, love and truth over our land' of Wales. A Prayer For Wales by @sowsoundofwales collective is a beautiful song and spoken word for our land - the land of revival and song. 🎶❤ 🙏 O make our Wales in your own image Lord. Head over to our Facebook page to listen 😊 #MusicMonday #SoundOfWales #PrayerForWales #PenuelRoch
Our Z👀 Kids discovered how some problems in the early church were solved by sharing responsibility.😀 Stephen and his friends were called to take care of sharing food out fairly.🍲🥖 We taked about the need to share with others, including charities which help others to share food, such as @trusselltrust . We also looked at our own responsibilities. We had a great time of prayer and catching up with news.🙏🥰 #Responsibility #PenuelRoch #RochVillage
We are here for you 🤗 The greatest hope we have, not only in lockdown but in our everyday life, is Jesus.✝️ You are welcome to join us at any of our online services and meetings. #PenuelRoch #Prayer #SundayService #Jesus #PenuelChildrensClub