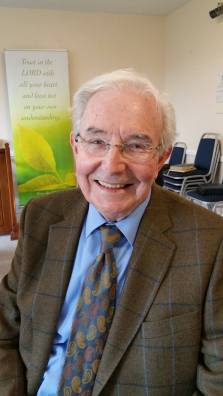 We recently welcomed Gerald Tait to take our morning service, when he preached from Luke 2:39-52, which he called ‘The eloquence of silence.’

Following on from the birth of Jesus there is silence until His ministry begins, except for one brief glimpse here. This silence must be respected. The gospels are a presentation of Jesus. Palestine was different in those days to what it is now. Jesus’ family chose to live in Galilee, in Nazareth, that the Old Testament scripture might be fulfilled – He would be a Nazarene. Nazareth had no major roads, it stood in the shelter of the hills where flowers bloomed. Jesus grew here as a child. This influenced Him. He talked about the countryside on many occasions.

This one glimpse of Jesus’ life is like a beacon. The family travelled about 80 miles for the Feast of the Passover in March / April. Thousands of people made a simple booth, a shelter to sleep in. The feast lasted 7 days. They went to the temple and offered sacrifices. Many bought 2 pigeons, unable to buy a lamb. Families reunited to worship in the temple. They would have experienced the wonderful singing of the Levitical choir. In these surroundings the boy Jesus is 12 years old. The service of Bar Mitzvah would have happened, when a boy becomes a man, when he becomes emancipated, no longer under his parents’ control. The interesting thing, when Jesus was found, He was subservient to them, He still obeyed them. His parents missed Him and searched for Him. The last place they looked for Him was God’s house. ‘And he said to them, “Why were you looking for me? Did you not know that I must be in my Father’s house?” (Luke 2: 49). Isn’t it true of us, when we are lost, often the last place we go to is God’s house?

Jesus then went back to Nazareth, to this quiet place. ‘For He shall grow up before Him as a tender plant.’ (Isaiah 53:2).

The eloquence of silence proves authenticity. The story would never have been invented like this; in a fictional world Jesus would have grown up in a palace. The silence stops invention.

It all clicks into place. It’s another 16 years until Jesus comes on to the scene again. John the Baptist prepare the way for Jesus. They grew up as cousins. There comes a time when Jesus comes alongside John and asks him to baptise Him in the Jordan. The silence gives a platform for the great announcement from heaven. When Jesus came out of the water, the heavens break open, ‘And the Holy Spirit descended in bodily form like a dove upon Him, and a voice came from heaven which said, “You are My beloved Son; in You I am well pleased.”’ (Luke 3:22). What could our heavenly Father be well pleased with? The silence of these years prove Jesus’ humility and dignity.

‘Therefore we also, since we are surrounded by a great cloud of witnesses, let us lay aside every weight, and the sin which so easily ensnares us, and let us run with endurance the race that is set before us, looking unto Jesus, the author and finisher of our faith, who for the joy that was set before Him endured the cross, despising the shame, and has sat down at the right hand of the throne of God.’ (Hebrews 12:1-2). Don’t be distracted by the things of this world. Listen and look for Jesus, who will be a blessing to you. His ministry will lift you up, He will lift the broken reed. The greatest discovery we can make is that He is always there to receive us. If we love and know the Lord Jesus He will become such a reality to us that we will hear His voice wherever we are.

On the transfiguration the silence was broken again. From the silence and eloquence of that, we come to the majesty of God. Listen to Him.

🥰 We had a blessed time at this afternoon's Ladies Zoom meeting 💐 We talked about everything from the challenges of lockdown, business, beaches, family, James Cordon's dad - but most importantly our love of Jesus and spending time in prayer. ✝️🙏 #LadiesFellowship #prayer #Jesus #daughtersoftheking #PenuelRoch #RochVillage #Pembrokeshire
We've had a creative Kids Z👀m meeting this afternoon. As we continued to explore Psalm 139:14, we developed our understanding of how unique and wonderfully made we all are 🤩. God loves us all individually and so we are to love others ❤️. We shared our likes and differences, talking about what we love about the world God has created 🌎. We finished with a time of prayer 🙏 bringing our joys and concerns to our heavenly Father😊. #PenuelRoch #RochVillage
#TuesdayTruth 📖 John 1:1-5 There is so much darkness in the world right now and often we find ourselves looking for light. We must remember the darkness has not, and will not overcome the light of Jesus Christ. ✝️ = ❤ #john1v1to5 #Bible #Truth #Light #JesusIsKing #PenuelRoch #RochVillage #Pembrokeshire
You will recieve power when the Holy Spirit comes upon you... to the end of the earth. Acts 1:8 Bethlehem was God with us, Calvary was God for us and Pentecost is God in us. 🔥- Robert Baer. #Pentecost #HolySpirit #Acts #Calvary #PenuelRoch #Evangelical #RochVillage #Pembrokeshire
It's been great to catch-up with news and have a time of prayer 🙏 at our Ladies Zoom afternoon , 😎 lightening the lockdown mood, thanking God for His provision and bringing the needs of our fellowship before the throne of grace 😘
We've had an exciting Z👀m Kids meeting this afternoon, sharing salt dough faces we have all been painting with bright bold colours, noting how diverse they all are 🎨. We explored how we are all unique and wonderfully made by God (Psalm 39:14) 👲👧. After playing a game we had a time of prayer 🙏 and shared our news. Looking forward to starting a new project on Sunday 😊 #Psalm139v14 #PenuelRoch #RochVillage